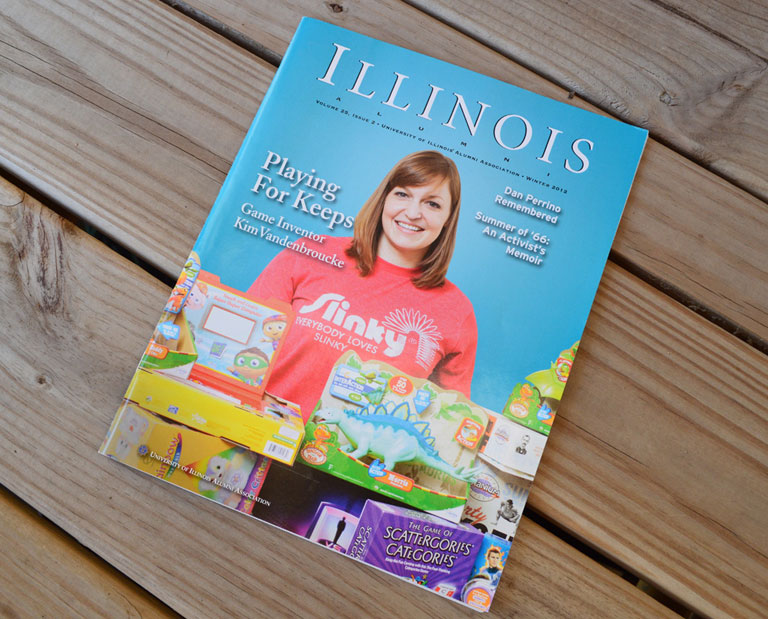 When I was in elementary school, a teacher asked me what I wanted to be and I said, “inventor.”  I was promptly told that was not a real profession and so I turned my sights to astronaut.  Turns out, becoming an inventor was a lot easier for me than becoming an astronaut.   A mild motion sickness problem was the first big indicator a trip to the moon wasn’t in my future, but luckily the prestigious Meyer/Glass design came to the University of Illinois Industrial Design career fair and my dreams of becoming an inventor were rekindled.

Meyer/Glass Design, a spin off of the original Marvin Glass & Associates, was the toy and game invention firm that gave me my start.  There I got a solid foundation including game play development, trivia writing, prototyping, concept design, and the business side of professional inventing.  My very first game, Cover to Cover, was licensed by Hasbro on the spot during a pitch meeting.

After MGD closed, I continued on my own starting Brainy Chick, Inc. in 2006.  I’ve invented and developed a variety products for companies in the toy and game world including Hasbro, Winning Moves, Educational Insights, Peaceable Kingdom, Asmodee, and Think Fun to name a few.  Being on my own also allowed me to branch out into brainstorming facilitation and to partner with multiple innovation consultancies to participate in brainstorming sessions for the world’s top brands and companies.

In 2009, I started The Game Aisle where I review tabletop games that I like and talk about the game invention world.  Not only does it help me keep up with what’s new, it also gives me an outlet to share with my readers great games that may not be found in big box stores, but are worth seeking out.  I also like to focus on the inventor behind each game and share their stories, because not everyone knows that many games are invented/designed by people like me — not big corporations.

Want to have some fun and frank conversation about inventing, the industry, being creative, and games?

How can I reach you with a question or project?